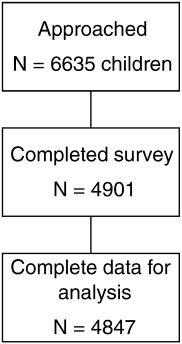 Sleep problems in the first year of elementary school: The role of sleep hygiene, gender and socioeconomic status

To determine (1) the relationship between sleep hygiene practices and parent-reported child sleep problems in students in the first year of elementary school, (2) whether the relationship differed by (a) gender and (b) SES and (3) in a multivariate explanatory model.

Cross-sectional survey of a population-based sample.

Families of children aged 4–6 years in the first year of elementary school in Melbourne, Australia.

Inconsistent bedtime routines and audio device use were each associated with an increased risk of parent-reported sleep problems. Associations did not differ based on SES but did for boys and girls in terms of inconsistent bedtimes on weekends. Behavioral sleep interventions targeting sleep hygiene could have similar benefits for all children, regardless of socio-economic status.