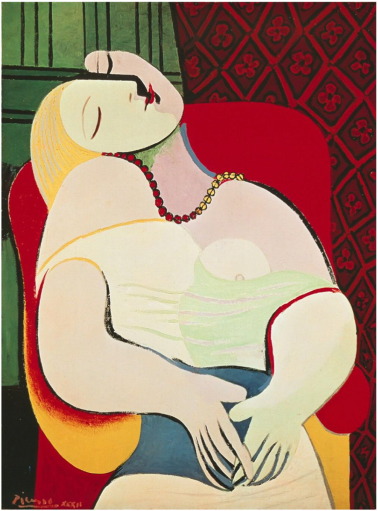 Pablo Picasso, Le Rêve, 1932. © 2016 Estate of Pablo Picasso. Credit for the journal cover image and the image above: Artists Rights Society (ARS), New York.
In 1932, Pablo Picasso created in only one afternoon what would become one of the most highly-valued paintings ever sold. Le Rêve depicts Picasso's mistress, Marie-Therese Walter,
1

who was then in her early 20s. Walter is reclining in the same red armchair that Picasso would use in many other paintings of her. Her anatomy is closer to reality than many of his other works but more rounded and seemingly melting into the chair that supports her. Her head, while resting on one side, is split in the middle in such a way that resembles a splitting of her consciousness.
2

The dado of the wall behind her continues into her head and past her lips.
1

The subject has been caught on the bridge between 2 states of consciousness: the waking world and the world of dreams.
Several details of this painting help it stand out in the world of modern art. Picasso's use of color references the era of Fauvism popularized 30 years before the painting was created.
3

Artists like Henri Matisse used this style to create images with bold colors and sweeping, strongly outlined shapes, their graphics almost cartoon-like. “Les Fauves”, or the “wild beasts”, broke from the more realistic impressionists and created a style that broke from realism in shocking originality. Years later, other artists, such as Picasso, used many elements of their groundbreaking style, which was at the actual introduction of Fauvism fairly short-lived.
4

Picasso's use of bright colors draws the viewer closer into the world of the dream itself. The vivid coloring, and the swirling and misshapen anatomy of the figure create the perfect scene of a dream itself. Le Rêve is the quintessential example of Picasso's distorted depiction phase.
3

The split head itself is a recurring detail as well—in other paintings, Picasso is known for using two halves of a head from different perspectives to make one.
For all the peace that this image shows, there is much controversy surrounding the painting. The work has been bought, sold, argued over, and even torn. It was bought by Steve Wynn at a value of more than $48 million in 2001 and kept in his casino in Las Vegas for years until he decided to sell it again.
5

When Wynn acquired it, the painting was then the sixth most expensive painting of all time.
3

The price of the piece had risen again to more than $100 million when it was about to be sold—when an art historian's tragedy struck. In showing off his painting to a group of well-known guests (including Nora Ephron and Barbara Walters) visiting his home, Wynn gestured to the piece a little too dramatically and pierced it with his elbow. Almost selling it for $139 million, “he accidentally whacked the masterpiece with his elbow, leaving a silver dollar-sized hole and scuttling the deal.”
6

Wynn later paid $90,000 in restoration costs and, after a legal skirmish concerning an unwilling insurance company, ended up selling the piece, quite impressively, for more than $155 million to art collector and hedge fund billionaire Steve Cohen.
7

For a work that was created in only about 5 hours, damaged, and patched to be sold for the most that an American art collector has ever paid for a painting is impressive to say the least.
Scandal is as much a part of the painting as the dramatic controversy surrounding its provenance. Marie-Therese Walter herself was Picasso's mistress, with whom he had a child and supported as his second family. The image is also known as one of Picasso's most erotic pieces even though she is almost fully clothed. Her blouse is falling off of her shoulder to reveal her breast. The top of her head seems to represent a penis.
1

Despite the controversy and scandal, Le Rêve appears with all the peace of sleep, with the subject's face seemingly innocent. The painting brings to mind the sweetness of sleep—whatever she (or Picasso) is dreaming about, she is enjoying it. Eight-five years after its creation, the image still generates excitement.
8
Tate Modern to host 'once in a lifetime' Picasso exhibition.
https://www.theguardian.com/artanddesign/2017/jan/30/tate-modern-picasso-exhibition-affair-lover-marie-therese-walter

Authors have declared that they have nothing to disclose.