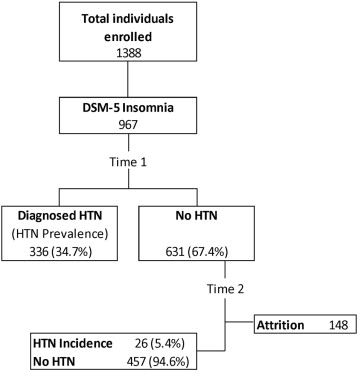 We examined the relative contributions of sleep onset and sleep maintenance difficulties in insomnia as predictors of incidence and development of hypertension.

This study is cross-sectional and longitudinal.

There were 967 adults with Diagnostic and Statistical Manual of Mental Disorders, Fifth Edition–based current insomnia.

This study provides novel information regarding the risk of hypertension in insomnia via sleep maintenance difficulties. Findings from this study provide preliminary evidence for examining nighttime fluctuations of blood pressure and concomitant physiological changes (ie, catecholamines, heart rate, and sympathetic activation) due to wake during sleep as a mechanism for subsequent hypertension.

Participants in this study were recruited as part of the Evolution of Pathways to Insomnia Cohort study, which was a longitudinal investigation examining insomnia in a large sample of adults living in southeastern Michigan (specific information regarding the larger investigation is detailed elsewhere).
13.
Moderators and mediators of the relationship between stress and insomnia: stressor chronicity, cognitive intrusion, and coping.
Sleep. 2014; 37: 1199-1208
Prospective participants were derived from a major health maintenance organization database, where a randomly selected sample of individuals (n = 36,002) were recruited by mail. Twenty-one percent (n = 7608) of these individuals responded by completing a Web-based survey that assessed eligibility for this study. Approximately 34% of these individuals (n = 2590) reported current/lifetime insomnia and were invited for study participation. Of all eligible individuals, 54% (n = 1388) elected to enroll and completed baseline questionnaires. See Table 1 for demographic and descriptive information for study participants and the Figure for the breakdown of sample by time points.
Table 1Demographic and descriptive information for study participants.
Abbreviations: NS, not significant; HTN, hypertension.

All study protocols were approved by the Henry Ford Hospital Institutional Review Board.

Diagnosis of insomnia was established based on Diagnostic and Statistical Manual of Mental Disorders, Fifth Edition criteria, using the following questions: “Have you experienced difficulty falling asleep?,” and “Have you experienced difficulty staying asleep?,” Participants met Diagnostic and Statistical Manual of Mental Disorders, Fifth Edition diagnostic criteria if 1 or more of the above symptoms were reported for at least 3 nights a week for a duration of 3 months or longer. In addition, insomnia criteria included daytime consequences or distress from sleep difficulties as determined by a response of 2 (“somewhat”) or higher on a 5-point Likert scale to the question: “To what extent do you consider your sleep problems to interfere with your daily functioning?” Responses ranged from “0” (“not at all”) to “4” (“very much”).
Sleep onset and maintenance difficulties were quantified via questions that probed for average minutes to sleep onset and duration of wake after sleep onset (WASO) during the last month. Prior research has demonstrated high correlations between results attained from retrospective sleep questionnaires and sleep diaries,
14.
Sleep questionnaire versus sleep diary: which measure is better?.
Int J Rehabil Health. 2000; 5: 205-209
suggesting accuracy in the use of retrospective sleep questions. Previous research using large samples of adults has also indicated that measurement of sleep-related impairments has higher sensitivity and specificity to quantitative thresholds.
15.
Quantitative measures of nocturnal insomnia symptoms predict greater deficits across multiple daytime impairment domains.
Behav Sleep Med. 2015; 13: 73-87
,
16.
Quantitative criteria for insomnia.
Behav Res Ther. 2003; 41: 427-445
The reported sleep variables were subsequently categorized based on quantitative measures of sleep difficulties to maximize sensitivity and specificity in detecting sleep-related impairment to blood pressure. Specifically, individuals who reported sleep onset latencies (SOLs) of longer than 30 minutes were categorized as having increased sleep onset difficulties. Sleep maintenance difficulties were also similarly quantified using WASO. Individuals who reported a WASO of longer than 30 minutes were categorized as having increased sleep maintenance difficulties.

Risk for obstructive sleep apnea and other covariates

Participants also completed the Berlin Apnea Questionnaire (BAQ) as an assessment of risk for obstructive sleep apnea (OSA) (16). The BAQ identifies individuals at risk for OSA based on 3 categories of symptoms: snoring; daytime sleepiness and fatigue; and obesity as indexed by a body mass index and hypertension. For the purposes of this study, hypertension was removed from the third category. In a validation study, the BAQ achieved high sensitivity in correctly identifying polysomnography-diagnosed OSA patients with an apnea-hypopnea Index greater than 5.
18.
Validation of the modified Berlin questionnaire to identify patients at risk for the obstructive sleep apnoea syndrome.
Indian J Med Res. 2006; 124: 281-290
Other covariates included age, sex, race, sleep duration, chronicity of insomnia, and general health. These were determined based on previous research indicating that individuals who are older, male, and of African American descent are at higher risk for hypertension.
19.
Risk factors for hypertension in a national cohort study.
Hypertension. 1991; 18: 598-606
Sleep duration and chronicity of insomnia were included based on previous research indicating increased risk for hypertension.
9.
Insomnia with objective short sleep duration is associated with a high risk for hypertension.
Sleep. 2009; 32: 491-497
,
20.
Short sleep duration as a risk factor for hypertension analyses of the first national health and nutrition examination survey.
Hypertension. 2006; 47: 833-839
,
21.
Insomnia and hypertension.
Sleep. 2009; 32: 1547
Finally, general health was included to account for other physical and mental health difficulties that may contribute to risk for hypertension. This was indexed by days of functional impairment in the last year due to physical or mental health difficulties.

Descriptive: incidence of hypertension and insomnia

At T1, results revealed that 34.8% (n = 336) reported a preexisting diagnosis of hypertension, compared with the prevalence rate of approximately 28% in the general population.
23.
Trends in cardiovascular disease risk factors by obesity level in adults in the United States, NHANES 1999-2010.
Obesity. 2014; 22: 1888-1895
At follow-up 1 year later (T2), an additional 5.4% (n = 26) of individuals reported a new diagnosis of hypertension. Demographics of each group are reported in Table 1. Preliminary analyses comparing sleep variables between those with and without hypertension revealed that individuals with preexisting hypertension reported significantly longer WASO, shorter sleep duration, and longer history of insomnia (see Table 1). No significant group differences were detected for SOL or number of awakenings.

Correlates with hypertension at T1

Prediction of incident hypertension at T2

Of 631 people with insomnia but no hypertension at T1, 76.5% (n = 483) completed follow-up assessment 1 year later. This sample was used in the third logistic regression, which tested exacerbation of sleep onset difficulties and sleep maintenance difficulties as predictors of incident hypertension at T2. Results indicated that individuals with insomnia who experienced exacerbated WASO (>30 minutes increase) from T1-T2 experienced increased risk for developing hypertension (see Table 2C). Exacerbation of insomnia via increases in SOL of more than 30 minutes did not contribute significantly to risk of incident hypertension.

In summary, this study provides novel information regarding the risk of hypertension in insomnia. Specifically, results suggest that individuals with insomnia who also report greater WASO durations are at higher risk for developing hypertension, after adjusting for age, sex, race, risk for OSA, general health, sleep duration, and chronicity of insomnia. Findings from this study provide preliminary evidence for examining nighttime fluctuations of blood pressure and concomitant physiological changes (ie, catecholamines, heart rate, and sympathetic activation) due to wake during sleep as a mechanism for subsequent hypertension.

This study was supported by an National Institute of Mental Health grant (R01 MH082785) and an investigator-initiated research award from Merck & Co, both to Dr Christopher L. Drake. Dr Roth has served as consultant for Abbott, Accadia, AstraZenca, Aventis, AVER, Bayer, BMS, Cypress, Ferrer, Glaxo Smith Kline, Impax, Intec, Jazz, Johnson and Johnson, Merck, Neurocrine, Novartis, Proctor and Gamble, Pfizer, Purdue, Shire, Somaxon, and Transcept; has received research support from Cephalon, Merck, and Transcept; and has served on speakers bureau for Purdue. Dr Drake has served as consultant for Teva; has received research support from Merck and Teva; and has served on speakers bureau for Jazz, Purdue, and Teva. Dr Cheng indicated no financial conflicts of interest.